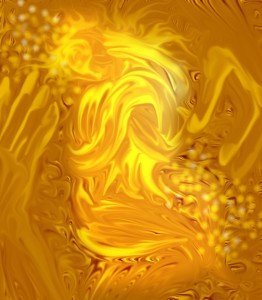 Some say that in Africa, before western influence, there was no such thing as romantic love.  The truth is much more complicated than this.  There was romantic love, and it was well recognized.  It was just referred to as intense lust, so in daily life, familial love and admiration was given a higher priority.

People did respect that intense lust so much though, that they named its Orisha: Oshun.

Oshun is regarded as vengeful if crossed, but otherwise extremely generous.  She can be impulsive and sometimes overly flippant about things others take more seriously, but she is not evil.  She just is the way she is because she can be.

Her domain is the pleasures of life, and often with great pleasures come great pain.  Life would however, be extremely boring and dull without her.

Oshun is very popular these days.  Though it is good to honor her, one should bear in mind that there are other female Orishas too, and other good and important things about being a woman than being pretty and lusted after.  Some people tend to forget others, and this is understandable, but I somehow don’t think Oshun appreciates the paradox and conflict that giving things to her that belong to her sisters Oba and Oya creates.  So be respectful of her and what she likes, and don’t appropriate things to her that she doesn’t like.

As an example, there’s the new “white” feminist standard for “beauty” that people try to push on her.  It is a good thing to go to Oshun to make yourself more beautiful, but if you go to her to try to look like the skin stretched over bones and silicone ideal from Hollywood, it’s not going to work.  The more you go to her, the more you are asking her to make you look naturally beautiful, not synthetically beautiful.  You’ll end up looking aerobics instructor beautiful or dancer beautiful, not skeleton beautiful unless you’re Gothic and that’s the legitimate aesthetic goal.  If it’s the latter though, Maman Brigitte is going to do more for you in that since fat cell shrinkage rather than just distribution needs to happen.

Gay and intersex persons who are outwardly male and comfortable with the manhood role but inwardly more feminine leaning, as well as crossdressers who need to go there occasionally can benefit greatly from communing with Oshun, as can Trans women.  It will help you to gain more of the essence of feminine grace and beauty.

Originally, Oshun was the Goddess of the Oshun river in Osogbo, Nigeria, but as her followers increased and spread, so did her duties.  She came to be recognized in just about all pleasant, drinkable and bathe-able freshwater springs, fountains, streams, creeks, and rivers around which grew palm and eucalyptus trees.  Almost everywhere there are adherents of Vodun and similar west African systems, there is at least a fountain dedicated to Oshun where offerings are brought.

To this day in Osogbo, there is an annual festival of Oshun where people from all over the world go to honor her.  Prospective priests of Oshun also go there to gain the blessing of the ancestral priests.