Home Vodun Frequently Asked Questions About Vodun What Is the Significance of Symbols in Vodun? Is It Okay To Wear Them? | Vodun F.A.Q.

What Is the Significance of Symbols in Vodun? Is It Okay To Wear Them? | Vodun F.A.Q. 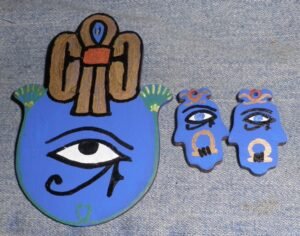 There are many symbols associated with Vodun and diaspora systems. Their meaning and significance, as with many things, varies from place to place. Some of the most familiar and widely publicized on the internet are Haitian veve. These are symbols that are employed when Lwa (deities, forces of nature, and honored ancestors) are called.

There are many other ATR/ADR that use such symbols, often some similar or the same. However, it is important to remember that regardless of what may have been watered down or forgotten over time, the Motherland traditions from which ADR’s grew did not consider these things representative but embodiment of the spirits to whom they are connected.

Once a veve or God-seal is drawn or crafted and activated, it is a sort of 2 dimensional fetish of a spirit or a gateway for them. It is not to admire them, represent them, or conceptualize them. It is them. In order for one’s mind not to break from the prospect, one could call it a part of them.

Humans are given the ability to build these embodiments through what adherents of Ifa and Orisha call our Ori. This is something like the Ba in Kemetic spirituality. It is where one’s personality comes from and an aspect of ourselves one should both honor and develop. It is the part of us that is real but unseen as most of the spirit realm is real but unseen. A witch (not Aje initiate but wise-person) or sorcerer either was given the ability or learns to use this similarly to an appendage like a hand or leg. Any person who understands how though, can create a drawn embodiment of a deity.

So most symbols, veve, and God-seals have nothing to do with magic, and are about traditional or religious observance. They may look exotic and pretty, but then so does a stained glass church window.

Bearing all this in mind, unique symbols belong to the cultures in which they were created. Yes, quite a bit is shared between regions and styles, but generally in the African community, we are aware and give respect to the originators of a particular design. A lot of exchange has happened especially between adherents of Oshun, Ezili Freda, Ala, and diaspora Mami Wata. So it’s not surprising to see similar heart shapes, fish, flowers, curls, and other beautifully dangerous indicators in all of their symbols. However, each group has their own take, and outsiders can seldom tell the difference.

The reason it is important to know what it is one is looking at and whether or not it is traditional, an innovation, regionally specific, agenda based, or just plain fake is obvious to most of you who would be reading this article. It is not so obvious to someone who has no exposure to the African or diaspora community though, so for those few of you out there who wandered in via some internet rabbit hole, I will explain.

First, since African and diaspora spirituality has been written about in western languages, there have been many gross misinterpretations. Some were honest mistakes, but others were perpetrated by “white” supremacists and Christian and Muslim clergy to sabotage those exploring African spirituality or profit from their energy or money spent on books and publications. Aside of what most symbols one would see in the public are usually used for, symbols can be used to hypnotize, subliminally program, or funnel spiritual energy vampirically from those who look at it without adequate protections.

Though the tendency in the magical/witchcraft community is usually the French “kill the author”, Africans haven’t historically been able to afford such flippancy. We judge things by whether or not they are effective, therefore one should consider the implications behind the revelation that Kenaz Filan is a “white” supremacist. He doesn’t seem to consider himself such, but then out of the other side of his neck, speaks from the wholehearted belief in American anti scientific “race” theory. He shames his own ancestors by glomming them into the multikult called “white”.

So apparently either he didn’t write any of his books or everything in them is rubbish. If it had been effective or real, then certainly one of the Legbas would have led him to at least give honor to his own ancestors instead of dishonoring them with that insecure energy. When you compare his work with say, Milo Rigaud’s (may his name be spoken eternally), it’s easy to see the difference. Milo Rigaud is from Haiti and grew up in the Haitian traditions. He actively participated in making Black people’s lives better. He can also explain in excruciating detail how a veve is constructed so that instead of stealing someone else’s, you can build your own.

Ah yes, out here in the diaspora, just like in the Motherland, we take symbols seriously. Whenever you see one, it wasn’t just thrown up to be cute or even just to show love. Each time your eyes pass over one, it is there to manifest something. So now we get to the next question.