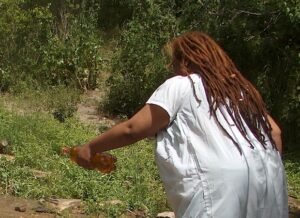 No. Voodoo is a western spelling of Vodun or Vodou, which is a type of indigenous west African belief system, spirituality, tradition, or religion.

Some Christians and Muslims call anything that isn’t their sect “witchcraft” or “devil worship”, but that doesn’t make it so.

Recently, in Asia, the word has become popular in reference to some of their indigenous and adopted mysticism, but it is still not necessarily witchcraft. Even modern witches living in the west who have reclaimed the title “witch” don’t necessarily do witchcraft. Many of them are something more akin to Pagan.

Back on topic though, Voodoo is not witchcraft even though some people who have Vodun or a diaspora extension or adaptation of it as a belief system, may practice witchcraft. To further complicate this though, the term “witch” doesn’t mean the same thing in Africa as it does today in the diaspora. So one has to take care when throwing that term around.

Today in the west, a witch would be defined as someone who purposefully calls upon the forces of Nature, deities, or spirits to manifest their will. They could be doing it for reasons that may be appropriate or inappropriate to others. They are not necessarily benevolent or malevolent, and which belief system they adhere to is not relevant in the definition.

What gets people confused about Voodoo is quite plainly racism. Much like Buddhism or Shinto, one may adhere to Vodun as a belief system, yet also practice any other religion with any other pantheon. Yet a Buddhist, even one who is very deep into the mystical aspect of a martial art, would not automatically be called a witch because “white” Americans don’t fear Buddhism as much as they fear Vodun. There was never a Nichiren rebellion in the Americas.

But then what are these Voodoo spells I see advertised?

This is where things get a little complicated. Much like many aspects of Buddhism, Shinto, Hinduism, and even Judaism get misinterpreted in the west, so do many aspects of Vodun. If I personally see someone advertising “Voodoo spells”, this is a red flag for me unless I see the advertiser is actually practicing and they are known in the community.

If they are genuine, then I understand that this is either a translation issue or their belief system is Voodoo/Vodun and they are what would be called a witch or sorcerer in the west, but a wise person or healer in Africa. You would have to ask them individually whether or not what they do is basically pray and give some offerings, or if there are any special steps involved to boost things.

To make it easier to navigate, usually children of Oshun and people in egbe Olokun are the most likely to be the ones doing directed spellwork as opposed to simply placing an issue on their altar for prayer. According to the legends, Oshun is the Orisha who got clearance from Orunmila for non numerically based divination methods. Olokun is well known to be the keeper of many of the deep mysteries, so initiates to his egbe often stretch their knowledge beyond the traditional.

After them, there are those in diaspora systems that focus on practical witchcraft and sorcery. They could be any belief system. As is often the case with practitioners under the umbrella term of “Obeah”, their specific discipline might not have a name people would recognize. It’s sometimes just easier to say “Voodoo” even if the truth is something close to central African derived ancestral. Also, they may even offer you the Yoruba pantheon if they feel you need to do some observance of your own, because it is cosmopolitan enough and they are definitely not going to reveal their personal allies to the public.

Then there are the folks in New Orleans. The spirituality is very interwoven with the spellwork, and their workings could accurately be called “Voodoo spells”.

Just be aware that some people advertising “Voodoo spells” are talking nonsense, but some are indeed legitimate and not wrong. It’s just that without the “spells” after it, Vodun is still a belief system.