Home Vodun What is Gris-gris? 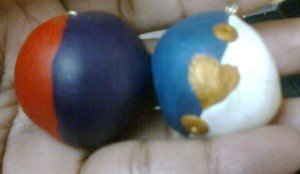 A gris-gris (also spelled gri-gri) is an amulet or talisman made by placing particular objects or ingredients into a small package for a specific purpose.  They were originally called “ouanga” or “wanga”, and are sometimes called mojo bags or simply charm bags.  A special type of charm bag that is very popular among practitioners of Santeria is the macuto.

Gris-gris can be in the form of cloth, leather, membrane, or paper, clay, foil, wax, polymer, or paper mache bags or balls.  They can also be in small jars or glass vials.  Each sect has their preferred way of packaging, and very often individual practitioners with a talent for making them have their own style.

They can be used for many purposes.  Some are generalized, but some are custom made for specific people or purposes.  For custom made gris-gris, many things may be taken into consideration when constructing them.  So make sure to answer questions your gris-gris maker honestly, so that they can make something that truly suits you well.

Some information about the contents of various gris-gris are open to the public, but not all.  Very few people are willing to tell their secrets partly because what works for one may not work for another.  Also, it’s about more than the ingredients.  Much like a bocio, making gris-gris requires mindfulness and often incantations, chants, or prayers while assembling it.

What is a macuto?  Is there a difference between macuto and gris gris? 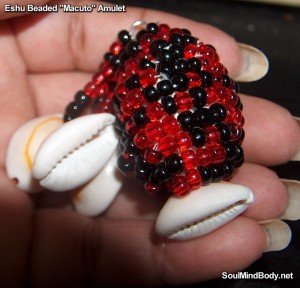 A macuto is what a charm bag or bundle is called in Afro-Hispanic communities.  There is not much difference technically between them and gris gris except that the traditions around them and decoration are closer to the original ouanga or nkisi from West and Central Africa.  There are a few distinct styles of macuto.  Among the most commonly known are the Santeria and Palo Mayombe styles.

Among the lesser known are the southwestern Hoodoo style of beaded medicine bags made by people of mixed African, Native American, and Hispanic ancestry.

A typical macuto is used either a “container” or beacon for the spirit of a deity or ancestor, or for a specific purpose similar to a gris gris.  Where some Hoodoo or New World Voudou practitioners’ formulae for making gris gris is not so heavy on the specific spirituality, the macuto is pretty much all about the spirits.  It may happen that ingredients may coincide with physical medicinal aims, but the reasoning behind their being there is because of spiritual traditions or because the readings said they must be there.

Though a macuto, ouanga, mojo bag, and gri gri may be technically similar, the energy patterns and mind with which they are made do make a difference.  The outer trappings are more than ornamentation.  It can take years for someone to learn how to properly assemble, dress, and seal ouanga.

Due to some issues that have come up lately, and observations of various things around the internet, I feel that it is important to understand that the ouanga belongs to people who actually practice Vodun or a diaspora faith in the same way that the Native American medicine bag belongs to Native Americans.  The art belongs to the culture, and though others may do it, unless they are sufficiently trained in the style of mysticism from that culture, it is not going to be effective in the same way.

It is impossible to learn this from books.  You can read as much has been written about herbs, crystals, and known sacred objects, but without training from an actual person at the priestly level, that includes clocking considerable hours of trance work and learning the Spirits of the ingredients you’ll be using, you won’t really know what you are doing.

Someone at a level that they can make talismans in general, can make an eleke, but nkisi and the like are another thing.  Though I am not overly traditional, I do understand why some things must be as they are.  Some people will accumulate the right experiences in place of formal initiations with time, and those people will ask the Spirits and their peers and mentors the right questions and be answered.   Others simply do not have the right mind for the African way of doing these things and should, if they ever need a nkisi, outsource this to, or get a mindfully crafted kit from someone who does have the right mind for it.  Just to be clear, these people are not always of recently African ancestry.  They do however, “get it”.

Also, another important thing to understand is that other styles of charm bags are not less effective for getting a particular job done than nkisi.  A mindfully put together chakra stone bag will work just as well as an energy centers nkisi.  It may not look as cool, but it does essentially the same thing.  If you are trained in the making of nkisi, if (and only if) a Hindu asks you to, you would be able to properly seal the chakra stone bag in a way that respects the Hindu oriented Spirits, and it might look quite colorful and interesting.  When all is said and done though, the trained nkisi builder is very likely going to make that bag look like a lotus or be reminiscent of vertebrae or their impression of chakras.

As styles merge and overlap, there is no problem of mixing ethnic traditions, but one should avoid things that could be intepreted as cultural fraud.

What about the do it yourself mojo bag kits? 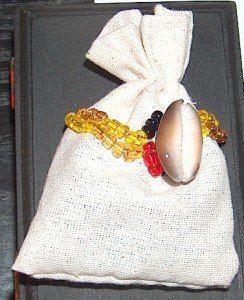 Now, for the sake of consumer information, I’m about to say some things that will make me very unpopular…or perhaps raise the standard for DIY mojo bag kits.

A proper kit should contain:

Instructions that begin with asking Eshu to open the gate.  If Eshu isn’t asked to open the gate, because it is from the North American Hoodoo tradition, there should at least be some sort of opening prayer or abbreviated “attention word”.

Incense for consecrating the supplies and then the finished bag.  So you should get two doses for burning on charcoal, two sticks or cones, or enough oil for two doses on an oil burner.

The ingredients, which may be chunky, powdered, or in the case of essential oils, a pad coated with liquids.  It may just be one amulet.  They vary.  In some cases, you may get a packet with ingredients because the priest/ess doesn’t want to take the chance of your losing or damaging anything.  Metal objects sent to women should be covered in a cloth packet.  In some traditions, any small representative drums sent to women should also be covered.

A bag made by hand or by mindful tailors.  The energy of a hand sewn bag is higher than a machine sewn bag, but if the maker was mindful that their work is for mystical purposes, this is a compensating factor.  What you don’t want is a bag that was mass produced in a factory.  The sewing of the bag is part of how the energy is focused and the purpose of the item confirmed.