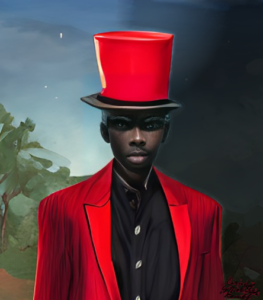 Oh Great Exu, Keeper of the Gate!
Between life and death,
The physical and spiritual realm,
The seen and the unseen,
The known and the unknown,
Please accept our humble invitation,
To join in this feast.
We ask your permission,
To commune with our Ancestors,
And with the Lwa who came before.
Oh Great Exu, Keeper of the Gate!
Please open the gate for us.

Disclaimer: Different sects, families, and groups have different beliefs. This article is not a full picture of how Eshu or similar forces are perceived by all practitioners of Vodun or other ATRs. Please consult an initiate or long term practitioner before adopting any of the rituals or even wearing any related paraphenalia. This article and all on this site are just for general information and introduction.

Day of the week: Monday for normal purposes, Friday for battle.

Eshu Elegbara, also known as Eshu, Exu, Elegua, or Legba, is one of the most popular and yet most misunderstood of the Orishas.  He is well known for being extremely powerful and working very fast.  Some view him as an evil trickster, and equate him with the Christian or Muslim concept of Satan, or the Jewish Samael, who is both good and evil. However, let it be clear that Esu is NOT Satan.

What many don’t know is that as powerful as he is, and as wild as he may seem, he is very honorable and extremely just.  He is the embodiment of divine or “karmic” justice or universal balance. The only reason some view him as evil is because of their own guilt.  Of course he will seem bad to bad people and hypocrites. He assures that all actions will have consequences.

Elegua as the gatekeeper is important for a few reasons.  One of the most important in metaphysics is that one must approach spirituality in the right mind.  It is crucial to respect nature and the spirits of nature, and not treat them like our servants.  They are not obligated to us.  We are obligated to them.  In the case of key ancestors whose fame led them to be honored as Orishas because they exemplified a particular energy, they did not come from us.  We came from them.  It is their genes, inventions, or cultural legacy that enhances our lives.

So before one asks anything of another Orisha or attempts to communicate with them, one asks permission from Elegua, which is symbolic of getting into the proper Elegua mindset.  This allows us to understand what we are being told.

Think about it: whenever a person in authority spreads a harmful idea, it is usually because they have forgotten that they are subject to nature, and this blinds them to any true messages from it or from God who created all nature.  They come to believe that they are not subject to natural law, and then that they can hide from God.  It is more than a slippery slope.  It’s a cliff.

Be aware that what Eshu/s and related be-ings view as balance and justice may be entirely different from what humans view as morality. Remember everyone has an Eshu including serial killers, rapists, and other predatory people. One should ask one’s self why those people can get away with what they do at times. Why doesn’t their Eshu or the first Eshu who witnessed creation stop them? It is because the default state of most things in the material universe is, I wouldn’t say non living, but non breathing. A living being must actively sustain life or they will become an agent of destruction. They still exist and haven’t been evolved out of humanity because this is the natural consequence of protectors and society failing to take care of people. They are the malaria mosquito and the ravenous lion. They are the staph infection from neglecting to clean. They are the tumor from repeated wounding. They are the walking agents of destruction who have no mind for anything else. If you can’t handle this idea and the responsibility that comes with it to defend your family and community, and avoid harming people from your greed, go back to church where they tell you to love your enemies and forgive predators. Go to where the unborn are more important than nurturing and protecting people already walking this Earth.

For the person of good character, Elegua is there to represent right thinking.  It’s not always pleasant thinking or friendly thinking. It’s balanced thinking and awareness. It is actively sustaining life if that is your call, and living up to that instead of just pretending to.  He is on the one hand pure logic, and on the other, pure wisdom.  So in every Vodun ritual or ceremony, approach Elegua (or whatever gatekeeping entity serves this function, there are myriad) first.  When you get the message that you’re allowed entry, then you may pass. In some cultures, the Ancestors, be it a particular group of them or a collective of them serve the gatekeeping purpose in ceremony, but there is usually someone managing the border between at least the living and the dead or physical and spiritual realms or particle and extradimensional reality.

Here is a collection of Esu songs compiled by Nathaniel Lewis:

In the new world, for a variety of reasons, the Esu of the Yoruba was divided in Haiti into Papa Legba and Baron Samedi.  The gatekeeper and dispenser of divine justice seemed contrasted to the embodiment of death.  However, the energy is what it is, and Baron Samedi is a face of Esu. He is also however, an ancestor specific to the Haitian/Ayitian people. Remember that Vodun is a living belief system and evolves according to the history and ecology of the area in which it is practiced. Just because a spirit is a face of another does not mean that they are all interchangeable. Eshu multiplies himself, which may mean clone or may mean reproduce/birth or may mean “twins” himself. The reason the differences are recognized is to keep awareness of the historical and cultural roots of it, not just because of incidental shifts. Though he does allow some exchange and adoration from people of other cultures in practice, be aware that there are lines that if you cross, you invite Death.

The force of Death itself however, is called Iku in Africa. It doesn’t have a persona as much as a presence, though she is recognized as a being.  So Death is related to by humans through Esu as the gatekeeper of Death. 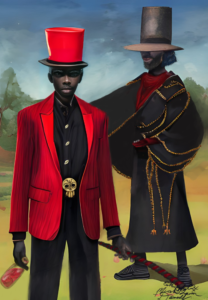 A big deal was made by some Santeros about the fact that there are many Eshus, and that Eshu in Yorubaland is different from Exu in Umbanda or other Eleguas, Eshus, Exus, Legbas, Edjus etc. This was based on a strawman argument claiming that by saying the various derived and similar gatekeepers or liminal deities were related, people were saying they’re the same individual.

In Quimbanda, an Afro Brazilian belief system, the Exu are said to not be the same as Eshu/Exu in other west African diaspora systems, though the original Vodun systems can contain what he/they are said to be because Eshu multiplies himself.  Since many insist that they are not the same though, I concede to their insistence.  I was not born into Quimbanda, so I can’t be the one to say.

I’d like to remind people though, of the story of Eshu with the multicolored hat.

When those of you who have been engaging in the useless debates are done being sick of yourselves for arguing over a deity well known for this exact sort of trick, let me know.  Or better, don’t let me know anything, and just determine in the future not to be so worried about the angles and details that you forget the basics.

Just because we say that a type of spirits are related or cascade or grow from one another does not mean that we’re saying it’s okay to just make stuff up or mix things up the wrong way. I do however, understand because of recent events involving people being unmindful and unwise, the fact that it’s not okay needs to be said a little louder and more frequently, especially with regards to gatekeeper deities.