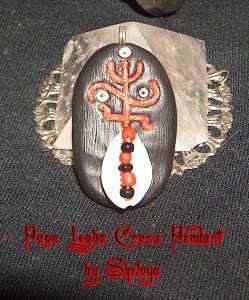 Eshu has many faces, in that he covers a variety of functions in nature and the human experience.  On the one hand, he embodies honor and civil relations, and on the other, the seeming trickiness or chaos of nature.  So he has many, many symbols and ideograms, depending on what people are calling him for or what aspect of him people need to remain in awareness of.

Some systems require that when one is learning of Eshu, they learn to draw his symbols in a particular way.  One that has fairly standard symbols is Haitian Vodou.  These symbols are called “veve”. Be aware that though some are allowable for any practitioner, some are for Ayitian people or initiates only, and some are fake. The fake ones may just be ideograms someone has made up, which is fine as long as they are honest about it and their sources, but some are not just made up but serve shady purposes. Someone may have embedded intent to feed them power. So don’t just use something you pulled from the internet without running it by an adept or initiate. The more complicated and ornate something is, the more likely it is to have “callback” symbols or code embedded.

For eclectic and Obeah type practitioners whose traditional lineage covers the trade and esoteric band from western Asia through central Africa, the symbols are not quite so standardized, but there are essential elements.  One is crossing lines.  In some systems or for some faces of Eshu, the three pronged fork, trident, or pitchfork is necessary.  I would say that for Africans in the diaspora, some curved or bent lines are also necessary, since one of the faces of Eshu we need to be aware of at all times is the original Mami Wata origin, which implies our bloodline and being far from home.  Candomble practitioners call this face of Eshu Exu Mare or Eshu of the Sea.  Another symbol of Eshu of the Sea is the seahorse.

Here are some examples of Eshu symbols or ideograms.  Note that the one in the bottom right may be useful for those of mixed ancestry.  It combines the Nordic yew rune with a curved line for the sea, and Eshu’s pitchfork. 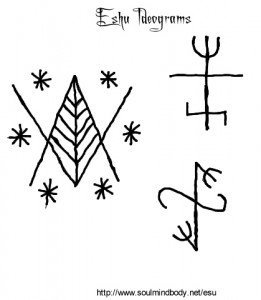 Bear in mind that these symbols are mainly protective. They can be used as activators in benevolent workings and sacred objects, but they are unsuitable for use in cursing or “hexing” although some blessings can seem like a curse. In 2020, someone posted that a friend had a dolly nailed to their door with the bottom right symbol on it. Between that and the others, it was clear that the “target” was up to no good or taking a path that they shouldn’t, and someone intervened to protect them or change their ways. So that’s an example of something good that was received badly, but hey, I hope it worked.

Different regions have different traditions concerning Elegua.  Global trade has also influenced what various Orishas are offered.  So in this article, I’m going to draw on my experience, apatakis (parable like stories) about Elegua, and good old logic to conclude what are and aren’t proper offerings to Elegua.  Some things are open to debate or situational.  Use your intuition and personal relationship with him to determine what’s right at a given time.  Often, he will bring you things he wishes you to offer through gifts from others, especially your dogs if you have any. As the Yoruba elders say, everyone’s Eshu is different. So take this information very generally. 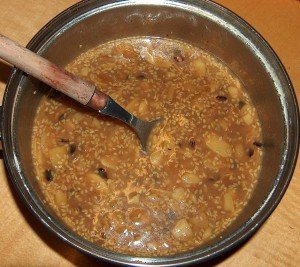 From west African tradition, we know that Elegua likes chicken (preferably roosters, but if they are unavailable, find the best you can)  His favorite parts are the dark meat, but this is because of the flavorfulness.  So a small, fattened chicken roasted with the skin will work as well as 3 chicken leg quarters.  If you can, a silkie (“wu gu ji” or black skinned chicken) would be a great offering.  You can find these in the Chinese market.

If you are running low on cash or don’t have where or how to cook a chicken, some real chicken soup powder or bouillion cubes will do.  Use three heaping teaspoons or three cubes to three cups of water.

Spices Elegua loves are hot red peppers, anise, and cumin.  He also likes sweets, especially honey, dates, silan (date syrup), jaggery, brown sugar, and coconut candies.  He likes sesame and almonds.  Green grapes or “white” raisins are good when you are asking for money (in the form of rewards for legitimate efforts).  He likes just about any kind of fruit.

College students who are financially pressed and don’t have cooking facilities may want to mix some real chicken and real tomato soup powder with sugar and three good dashes of red pepper, add hot water, and give this.  It really is the thought and the ability that counts with Elegua.  If you are a rich person, then your minimum offering would be greater, like three roasted chickens, a pot of black eyed peas, a pile of fruit, and well, as much as you can reasonably give.

The oil that is used to prepare any food for Elegua should be unhydrogenated palm oil, virgin coconut oil, or chicken fat.  The palm oil is debatable.  Some groups believe Eshu likes palm oil, and some that it’s one of his taboos and makes him angry.  I say follow your heart and direct instruction from Eshu.  Maybe he likes it from some people but not others.

Another offering that is given to Elegua is abrus precatorius, but these are very dangerous.  One should not handle them unless they are traditionally trained.  If any of it gets into your blood, you will die a very painful death that takes five days.

Food offerings should be left at a crossroads, a corner, or a space in between two or four buildings.  If a dog or a calico cat comes to eat them, then this is a special blessing.

Burnt offerings to Elegua can consist of any of the above, but can also include red mice.  These should be humanely killed, preferably by a veterinarian who can dispatch them with minimal trauma.  It is a special blessing however, if your dog or cat brings them to you.

As incense, Elegua likes spicy aromatics like anise, cinnamon, frankincense, oudh, and red flowers like rose, or the seeds and flowers of coral trees.

Click below to continue with libations and liquid offerings.