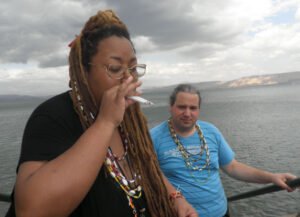 They most certainly can.  We just prefer to think of them as light skinned.

Scientifically speaking, the genetic origin of all humans living today is in Africa.  So it is not a question of whether “white” people are naturally entitled to the Vodun or not.  The big issue around it is mostly cultural, and for adherents to the idea of human biodiversity, capability of understanding Vodun.

I can’t say that all people of European ancestry can get it, but certainly some can.  Those who do get it, same as Black folks, get it through their Ancestors.  Rather than co opting Vodun, they learn the Vodun and various ways of honoring them, and then apply that to their spirituality in a way that honors their own Ancestors.

As an example, let’s say a person of mostly Nordic ancestry begins to have dreams and visions that are clearly from an Orisha presenting themselves in African form rather than “translating” their appearance to a Nordic one.  This likely means that there is something in Vodun they need to learn that they might not otherwise get or understand.  It is usually that they need assistance from an African because some knowledge has been lost to Nordic people that is still alive in Africans.

Some apparently European people though, actually need to go through the conversion to Vodun as a faith.  It could mean that they have an African Ancestor who they are aligned with somehow, and this Ancestor wants them to basically be African.  It could also be that they are not going to get what they need spiritually anywhere else.

The problem is that though the Spirits, not humans, choose who is going to serve them and how, humans do have issues and hangups.  There is the external opposition to “white” faces in Vodun, and there is also the massive cultural and social chasm between Europeans and Africans.  In order to fully embrace Vodun, a “white” person has a longer and more perilous road to travel than someone who wakes up Black every day of their lives, especially if they haven’t unpacked the idea of “whiteness” itself.

As someone I don’t remember said long ago, a White person can put on a suit and be acceptable in western society.  A Black person, no matter how well dressed, is still viewed as a n*****.  That is in the diaspora.  In Africa itself, most indigenous Africans do not trust European people, and for good reason.  This may not be something to feel particularly bad about though, since Europeans often do not trust certain other Europeans, and some Africans often don’t trust certain other Africans.  There is tribalism everywhere.

You should consider though, how you would feel if you met an African who told you they were having dreams about Odin, and they felt they were called to Asatru.

One of your first questions would be if they were mixed.  If their answer was no, you would wonder whether someone was simply adding to their perspective or running away from their ancestry.

Like a person can’t solve the problems with their spouse in the arms of another lover, you won’t solve issues with your ancestry by running to a different culture.  Though the Orishas belong to everyone, African culture belongs to Africans.  Be mindful of the lines, so that you don’t disrespect your own Ancestors or someone else’s.

The Ancestor and Loyalty Factor

If you are a non African (or not recently African) person who feels called to Vodun, as I said, you will have a harder road and much more to prove.  The reason why is that, especially if you are American, you will need to atone for your Ancestors’ and own your own contribution to the perpetuation of “white” supremacy, and the illusion of “white” privilege.

You will no longer have the luxury of living in the cognitive dissonance that the vast majority of your peers do, regardless of what political factions they profess.  You will need to understand that much of what you call being a “good citizen” perpetuates “white” supremacy.  There may be little you can do about some things without running afoul of those in power, but you will ultimately pledge yourself to supporting the system as little as possible.

Since we all pay for the crimes of our Ancestors, you won’t be exempt from the work of stopping negative cycles left from yours.  We all have to go through this, and your road may be much more painful.  If your family owned slaves, or you know of any abuses they committed against Black people, you will have to do appeasements to those they harmed and/or killed or facilitated the harm or killing of.  You will have to be real about yourself and your background. If you are financially able, you will have to make financial reparations to the descendants of the people your forebearers presumed to own or harmed through “white” supremacist behavior. If you are unable to make financial reparations, you must do what you can to fix some of the damage.

It will be difficult.  I personally don’t know anyone western European or “white” who has made it through if they have not had a Black Ancestor within the past 5 generations.  If that’s not you, then you may want to love our faiths from a safe distance, though even as a worshiper of select Orishas, you may still end up facing these issues.  Once you open the gate, you can’t close it again.

Related Question: What is a White people trap?

A “white people trap” or “WPT” is an item that is sold to either scam or purposefully sabotage people of apparent European ancestry.  At best it is something to fool them into thinking they are special members of some religion they think is cool and exotic, and at worst it can actually hurt or kill them or their loved ones.

Horror stories abound of naive European women and some men who have been lured into cults run by unscrupulous people, and then financially exploited or sexually assaulted.  These are well publicized once they are found out.  There are also “monkey paw” situations that have become stock Hollywood fare.

What doesn’t get a lot of attention is the horror stories about people buy items specifically for spiritual purposes, and then get their butts kicked by malevolent energies for being stupid or disrespectful.  Nobody wants to talk about that.

…and though I can tell you a few stories of this happening to people I know and know of, I don’t want to mention any names.  Instead, I am just putting this information out there to tell people to be aware.  Be sure that you really understand how to respectfully approach any deity or spirit that you are bringing into your practice or your home.

Remember that Vodun was not invented for westerners or with a western mentality.  Take things out of context, and it can really mess you up.