Why do Vodun practitioners wear headwraps? 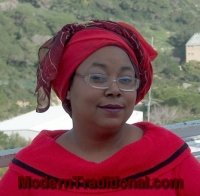 Vodun practitioners wear headwraps for various reasons.  In everyday life, it is a matter of preference.  Some do and some don’t.  In ceremonial situations, a headwrap is part of the costume of some Orishas or part of formal African clothing.

Generally, male Orishas manifesting through human bodies or in human form wear a sort of bandana reminiscent of a “do-rag”, and female Orishas, a more formal “up-do” or turban type of wrap.

In everyday life, some practitioners of Vodun and related faiths like to wear a white headwrap, especially if they have matted or twisted locks similar to dreadlocks.  For some, only people initiated into their group are permitted to see their hair.

Basically, customs vary.  If you’d like to learn how to tie a headwrap in various ways, visit ModernTraditional’s section on headwraps.