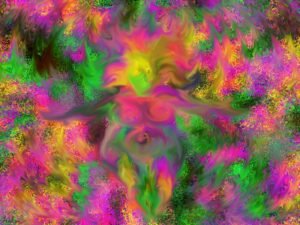 An issue that comes up frequently is that a person is ridden or “possessed” by an Orisha who wants sex.  Because it is a benevolent possession, one has some control of their actions, and this may break the trance, causing the ceremony, dance, or the riding to end prematurely, which is no fun for the individual, and a bit of a killjoy for the other participants, if any.

Sometimes, it can be quite frightening for a person who is chaste in their normal life, to be overtaken by superhumanly intense feelings that they were not expecting.  Especially for those from Christian, Muslim, or Jewish backgrounds, a night of being Shango-ed can be difficult for a chaste person who is say, cisgender, female, and generally living by western societal expectations.  A night of being Oshun-ed can seem embarassing to a man who is cisgender and heterosexual, especially if he is usually very humble.

It’s not just about the sex.  It’s about the whole personality around the sexuality of Orishas or ancestors whose personalities or genetic line is still very strong and therefore still a prominent part of the Collective Consciousness of humanity.

So here’s my advice on the matter.

Be an Understanding Observer

Nobody should be made to feel embarrassed about the things they do when they are being ridden.  You should not gossip about ceremonies or really even discuss what happens during rituals with others unless it is to say something positive.

It is okay to discuss these things with other spiritual people who may learn something important or gain some understanding of Vodun from it.  It is not okay to joke or laugh about someone maliciously.  When you crack on people who are or have been ridden, you’re actually insulting the Orisha or ancestor possessing them.  So be respectful.

Have a “Trip Sitter” Attitude During Ceremonies

If you are one of the designated watchers during a ceremony, this is like being the designated driver for your friends at the bar, or the trip sitter for the otherwise intoxicated.  The Orishas don’t live by the normal rules of society, so there are things they may want to do while they have hold of a body that may not be exactly convenient for the person they’re riding.

If the Orisha is a deity of a force of nature who never had a human body, they are seldom actually sexual because their method of production or reproduction is not based on the physical body.  So if a person (or quite often group of people) is possessed with Yemaya, and they are making out with a person possessed with whoever, they’re just showing their affection, and it most likely won’t lead to anything.  They are just manifesting the water surrounding a person.

If, on the other hand, a person being ridden by Oshun is making out with someone being ridden by Shango, they were married when they were living on Earth, and will behave like a married couple if they make physical contact.  It is not a good idea to interrupt them, but in such a case, if the people have any issues with the results of the union once they are no longer being ridden, they should be made aware of what happened, and helped to cope.

One should also remember that some Orishas make very sexual gestures and are very playful, but this will not likely lead to anything irreversible happening.  Just let them do their thing.  If they tell dirty jokes or flash people, that’s just part of who they are.

Be Mindful of Age Appropriateness and Culture

Most kids in the west are not mentally prepared to see some of the things they might see in a Vodun ceremony.  For this reason, it’s probably a good idea to keep people under 16 away from ceremonies where something sexual might happen.  You might want to have special ceremonies separately, just for the kids that don’t involve being ridden.  With a few notable exceptions, most kids’ brains can’t handle it well anyway, so this is something they should be prepared for by the time they reach adulthood, but not pushed into.

Some people are never ridden, and for good reason.  So even adults should not be made to feel bad if it never happens for them.  They may have some psychological vulnerability that wouldn’t allow them to do it safely.  They may also just best serve the community as a watcher.  They could be a very nurturing person whose best role it is to keep everyone safe and comfortable.

If the Orishas feel that a person needs to change their life, and would not do so under their own motivation, they may keep their hand on a person after they have been ridden.  If you feel pushed to do things you wouldn’t normally do, the solution is not to panic, but to pray.

For example, it sometimes happens that Shango may “invade” the life of a normally shy or overly humble man, and drive him to talk to more women, and be what he may think of as “rude”.  If he fights it, this may not work for him very well, but if he stays in touch with Shango, he will see the “method in his madness”.

Shango may be trying to tell him that he needs to be more manly, or that his shyness may cause him to miss the chance to meet his destined mate.  If the Orishas feel that someone is unduly miserable, especially those who started out as humans or lived through human avatars, they may act through a person to sort of “force” improvements.  The best thing to do is try to learn from it, and don’t fight Nature.

Children conceived as a result of the Orishas riding two people towards a union are special and should be considered children of those Orishas.  This does not mean that they should be spoiled or pushed into Vodun.  It should just be kept in mind so that if they show special abilities, this is normal for them.  One should take care that they are not recruited into religions that consider Vodun to be “witchcraft” in the negative way.

Regardless of how inconvenient they may seem at the time, they should not be aborted (unless medically necessary, and yes we do have grieving ceremony for this) or mistreated even before they are born.  The mother should avoid any of the taboos of the Orisha she was ridden by during the child’s conception.  For instance, if she was ridden by Oya at the time, she should not use any palm oil or smoke, or stand too close to people who are smoking or using incense.  She should also wear amulets or talismans in the Oya style, or wear or carry something purple, dark red, or the nine colors (rainbow + black and white or opalescent).

If she was being ridden by Oshun, she should wear yellow and avoid ever putting her head down in shame or embarassment.  She must behave proudly and try to get her way, and take special care of herself.  Others should assist her in this and try to keep her from getting dirty or being inconvenienced or uncomfortable.

It is even more auspicious for the father to live in awareness of the Orisha he was being ridden by at the time of conception.  Though it is good if the mother does, it is very important for the father to as well.  If the mother is slacking off or breaks a taboo because women who are pregnant sometimes get emotional or depressed, the father remaining steady will make things run smoothly despite her frazzledness.

When the child is born, he or she should be dressed in the colors of their parent Orishas for at least one year.  They should use natural cloth diapers or the parents should be excretion aware.  They should be breastfed if it is at all possible, for at least six months.  If the mother cannot, then someone who is a child of the mother Orisha should wet nurse if possible.