What is an eleke? 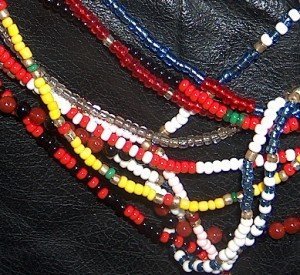 An eleke is basically a string of beads.  It can be in the form of a necklace, a bracelet, an anklet, a kneelet, an armlet, waist beads or breast beads.  In the context of Vodun and derivative systems, it is a string of beads that embodies a Spirit or Deity or aspect of them.  They can be dedicated to one or multiple Spirits, including one’s ancestors.

Not all African or diaspora systems have a tradition of wearing elekes.  Because there is a lot of cultural exchange, some may borrow traditions from other groups though.  They may make use of different patterns based on their local or personal beliefs, so not every Eshu eleke for instance, will look the same.  Some may have alternating black and red or black and white, or three black, three red, or a combination.  Sometimes it depends on whether or not the eleke has a dual purpose of both embodying a deity and giving a related blessing or trait to the wearer.

Since Vodun is not really a representative faith, when we say “represent” what we mean is “simultaneously symbolizes, embodies, and calls”.  So they don’t merely represent the Spirits.  They are something like tendrils of the Spirits that a person mindfully constructs and consecrates.  The artist is the tool more than the object.

Where do I get a real eleke?

You may buy an eleke from a shop, receive them as a gift from family or a blood level friend, or receive them formally from the person in your community or “house” who has the authority to give them, or receive them from a solitary practitioner or Obeah-person who is at least of a level that they can make talismans that work.  The first eleke you should always buy or receive is that of Eshu (or your ancestral main Gatekeeper), regardless of who is the Spirit of your head.  Its colors and patterns will depend on your house or priest/ess.   It will usually be black and red, black and white, or black white and red, in patterns of threes.

A real eleke will be made by hand, with each bead strung by hand.  It should never be made in a sweatshop or by literal or de facto slaves forced to make elekes.  You can usually tell by the price.

It takes a skilled beader, working in a state of near trance, at least an hour to make an eleke.  While making it, they will be singing to the Spirit(s) they are making it for.  Different people make different wages in different parts of the world, but if it costs less than an hour or two of minimum wage in the part of the world the shop is in, it is very likely made wrong.

Then there is the cost of supplies, and if they are supposedly made by someone at the priestly level, the costs of incense and other things needed to bless them.  Unless they are getting all their supplies for free, which some people do, they should be at least in the arena of $10-25.

Some can afford to charge less, or are happy to take a loss, but the vast majority of real eleke makers at least need to make their costs back.  So buyer beware.  If the price looks too good to be true, it probably is.

As has been mentioned in the comments, some believe that the only good way to receive an eleke is from one’s “godparents” or mentors. Though it is by far, not a universal thing, I would have to say that if you are in an area where this is the common practice, you should respect that and be ready to explain. Nowadays, many are suffering from “one true wayism” and have been misled, and this is not their fault. They place way too much importance on certain items because they don’t know that there is an authentic way of making ceremonial necklaces, and since none of us is going to sit and chew glass and gum here in the diaspora, folks should lighten up a bit.

Actual Yoruba, Bini, Akan, Fulani, and other tribal and ritual necklaces are totally different than the lightweight Czech and Japanese beads most people are wearing in the diaspora. If someone’s elekes are different or differently sourced than yours that is not your business. Yes, it is bad that this aspect of our culture is often copied, but they can’t copy the blessing. A string with no beads that has a strong blessing is better to have than a greed gained string of pearls.

How do I wear my eleke?

Elekes can be worn for ceremonial purposes, or in daily life, to keep a Spirit close to you and on your mind.  It can also let other practitioners know that you are their brother in Vodun.  To people who don’t know the codes, they’ll just look like beaded necklaces, but to someone who does, it lets them know about you in a similar way to people knowing your astrological sign.

For ceremonial purposes, you should always put on the eleke for Eshu (or your ancestral Gatekeeper) before putting on others.  In daily life, you can wear that of another Spirit alone, but you should at least touch your Eshu eleke first.  Wherever you hang or store them, the Eshu eleke should be stored first.

If you like to wear them in daily life, it is best to have a set for ceremonial purposes, and a set for daily life purposes.  Your ceremonial elekes should never see the inside of a toilet room, or be worn for any purpose but ceremony and ebo.  If you do corrupt them, you must give an offering to apologize to Eshu and the Spirit(s) you offended.

That said, if you participate in certain activities, your elekes will get dirty.  You may clean them with fresh, clean water or whatever material is appropriate for that deity and tradition.

What activities are permissible for you to do while wearing even a daily wear eleke depend on the Spirit it carries.  Orun may allow you to wear his eleke while tanning or frolicking on the beach, but Osu may prefer his eleke be covered in the day and only worn outside the clothing at night.  Know your Spirit, and you’ll know how to wear their eleke properly.

Can I put a pendant or ornaments on my eleke? 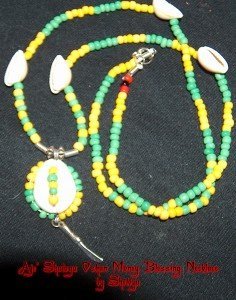 Again, it depends on the Spirit’s preferences, but generally, you can.  The pendant should correspond with the Spirit.  You would be ill advised for instance, to wear an Oya pendant on an Oshun eleke.  Many elekes are made with pendants.

Can I make my own eleke?  If so, what is the standard?

Yes you can make your own eleke, but I strongly recommend that you not do so unless you are advanced or under the supervision or guidance of an advanced practitioner of the priestly level.  By priestly I mean that they are living so deep in the Spirits that even their diet and sex life is guided by the Vodun.

Register, log in, and click here for specific instructions for how to make your own or instruct your ile’s artists to make eleke if needed.

What does it mean if an eleke burns my neck?

You may be allergic to some pigment used to make the eleke.  You should try one made of undyed natural stone or plastic beads.

If it is made of undyed natural stone or plastic or glass that has not been coated with anything, it could mean that the Spirit it carries is trying to tell you something.  It could be that there is danger near, or that you are about to do or have done something to offend them.

It could also just be that it has accumulated sweat and dirt from your body and needs to be cleaned.

What do I do if my eleke breaks?

In my tradition, you may re-string it, but you must start the procedure over again, with offerings of apology for breaking a sacred object.  Some of us have “veteran” elekes that have sacrificed their beauty multiple times to protect us.  Broken beads are given an honored burial, and the remaining beads are strung on a new eleke.  The broken string is burned honorably in a censer.

In some people’s tradition, a broken eleke is to be completely disposed of.  What you should do depends on your traditions or divination guided instructions.

What does it mean if my eleke suddenly breaks on its own while I am wearing it?

If it just all of a sudden breaks or one or more beads explodes a little or cracks while you are wearing it, this means that its Spirit is fighting something that caused him/her to rush to defense, and this was too much for a mere physical object to bear.

Stop, look, and listen.  You have likely entered a situation that is spiritually and/or psychologically dangerous for you, and need to get away.  Thank the Spirit for protecting you.  Give them an offering, or have your priest/ess give an offering on your behalf.  The eleke can be re strung with the remaining beads.  Any that have broken should be buried, just as you would bury a crystal that had shattered for the same reasons.

Can other people touch my elekes?

It is not advisable that you allow others except maybe close relatives, apprentices, or assistants to touch your private ceremonial elekes.  Your outside wear elekes should be consecrated regularly, and if you like, can be touched by others.  However, it is best that you not allow anyone to touch your elekes if you are uncomfortable with them or sense a lot of negativity in them.  This will make them prone to breakage or other damage.

From the other end, don’t touch people’s elekes without their permission.

How do I store my elekes?

Your private ceremonial elekes are best stored in a box or bag away from other mundane jewelry.  Your outside wear elekes can be hung up in a special place on your altar or in your dressing area.  Just try to protect them from dust and damage.