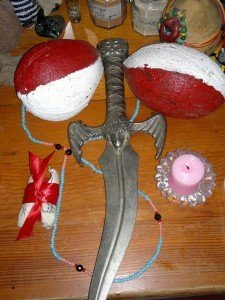 Orisha Oko is in charge of agriculture, and owns all cultivated land.  He is also a judge in many matters, including but not limited to witchcraft and the benevolence or malevolence thereof.

In the diaspora, where most of our practice has been labelled malevolent “witchcraft” by the misinformed, we depend on him to learn to use our gifts sanely and appropriately.

His sacred number is 2 or 7.  He is strongly connected to Obatala, Yemaya, the Ibeji, Ogun, and Oshun.  Traditions vary as far as their relation. 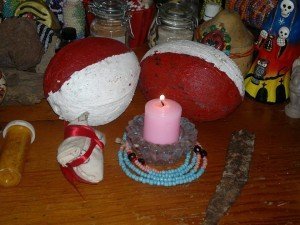 In altars, shrines, and rituals, he is embodied in an iron rod, by a sword thrust into the ground, by two coconuts each painted red and white, and by the plow.  In some cases, people have represented him with a balance scale, or balanced objects.

His taboo is salt and saltwater because too much of it ruins the ground for vegetables.

He is depicted with a large set of genitalia, especially giant testicles which plow the ground, producing fertile crops as he walks by.

He is the star of the yearly yam harvest festivals in many African communities.  These take place usually in August or September.  It is a good deed to be extremely generous in all ways during the festival.  Generosity brings prosperity.  During the festival, “rain makers” who are priests and other gifted people who are specialists at bringing rain help to make the festival, and are rewarded well for this.  Vegetable dishes are cooked in the homes and establishments of adherents, and given out to the public.

All witches or actively spiritual people who are worshiping Orisha but operating outside the confines of the African priesthood, should respect and give offerings to Orisha Oko.  This will ensure that you will stay in the appropriate energy and shows that you concede to the judgement of Nature, and have no illusions of somehow operating outside of Nature.  Surely, if you screw up, Nature will do what she does anyway, but observance of Oko keeps you aware of where the boundaries are. 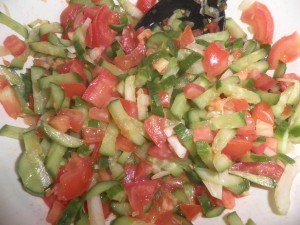 Oko loves just about any kind of vegetable, but it is more meaningful and will help you more to give him things that are locally grown in season.  In places where yams are grown, it is a big deal to give him the newly harvested yams, but if you live in an area wherein the apple harvest or cactus fruit harvest or corn harvest is a big deal, then this is what you should give him during those harvest times.  Other times of the year, it is good to give him what is in season then.

On the other hand, it is a good idea to, at least during the time the yam festivals are going on in Africa, give him some yams or at least sweet potatoes then to express your awareness of your origins.  Some starchy root vegetable should be given at least.

Vegetable salads, stews, steamed vegetables, and fritters are all good offerings to Oko.  I have gotten good results from occasionally offering red and white fruits and vegetables, such as red delicious apples, and radishes.