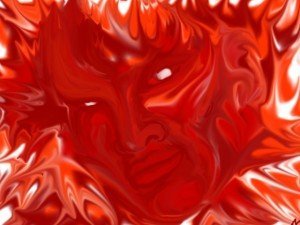 Hot blooded heat incarnate,
He is fire and lightning.
If you’re good he is a light,
But if you’re bad he’s frightning.

There are many apatakis about his firey temper.  During his mortal life, he was said to have been a powerful mage who could call lightning from the sky.  Some say that the prophet Elijah was given similar powers because, unlike the distracted idol worshiping Jezebel or his equally distracted fellow Hebrews, he brought himself above politics and nitpicking about interpretations of laws, and was given the powers of Shango (to call down fire and lightning) and of Oya (to raise the dead) by the Supreme God.  As a result, he did not die, and was carried personally to heaven by Shango and Oya in the form of a chariot made of fire, carried on a whirlwind.

This is why the prophet Elijah has been raised to the status of an Orisha in his own right, by some in the diaspora who combine Christian beliefs with Vodun. One should note however, that much like some legends of Shango, Elijah’s story is a cautionary tale for Jews who are the originators of the story. He was considered way too intense, and his extremism cost Israel a leader who could have prevented invasion and exile. He was given the powers to save his people from this, but let his ego take over.

Shango likes hot peppers and spicy foods.  Just about anything with some heat, he enjoys.  He also likes red apples, bananas, pumpkins, pomegranates, kola, and okra.  One of his favorite foods is cornmeal grits (also called mamaliga or polenta).

He would be very pleased if you take the time to make him some tamales or stuffed corn dumplings pan fried a little in palm oil.  He really likes palm oil (which may be why he chose to love but not reside with Oya, who hates palm oil very much).

I have always gotten the best results from Shango by burning Opium resin oil.  He likes spicy scents very much, and every time I have both burned Opium oil or incense, and worn some on my body, I have attracted a man who changed my life for the better.  Every.  Time.

To be specific, the scents that brought in the Shango energy were pepper and cinnamon.

The Louisiana recipe of Isis oil or powder is also extremely Shango friendly for women.  Men should use the traditional Shango recipe.

Shango does not like women fighting each other.  If you are a female child of Shango or in Shango awareness because you want something from him or need to raise your fire element, you should make peace with the women around you.  This does not mean that you have to give in to their whims.  It just means you should avoid petty conflicts.

Shango also does not like women who don’t respect men, or men who don’t respect women.  Though it isn’t discussed much because we tend to not be up in each other’s business in African spirituality, it can be said fairly that he doesn’t like any gendered disrespect or violence. If you are a man or masculine person, it is important to be protective of all feminine people, not just the ones who claim the label of women. By the same, a feminine person should reward that protection with nurturing or at least not making things harder for the protectors. It’s complicated since a lot of social interplay is complicated, but a true king is someone who gets their duty in their society or group.

Respect isn’t the same thing as deference.  If you are a man, you should be behaving like a man, and lead the people in your life who need to be lead, and know when to take a step back and be useful and effective for another leader.  Few people in general don’t need some kind of leadership, and if your partner does, you need to do that and stop drinking the “white” feminist koolade. Your desire to protect and to be the front person who takes the slings and arrows first is not wrong or toxic. Though one should not go to the extreme of hegemonic masculinity, one should embrace the role of man as a protector in a community. There is a balance that you especially need to embody.